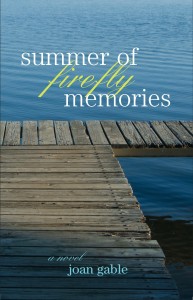 Summer of Firefly Memories, a women’s fiction novel, is a great escape! I hope the photo on the cover makes you want to dive right in!

Come join the four McGreggor sisters in one rustic cabin on a lake in Northern Minnesota.
Anything can and does happen?

Sammy, an eco-journalist at a personal crossroad, beckons her three sisters to the rustic lake resort of their youth. The last time any of them were at this lake was over twenty years ago, before their parents’ tragic deaths.

Alex, the youngest of the four McGreggor sisters, wasn’t even in high school when their parents died. She’s struggled her whole life with her own mortality and with finding her life’s direction. Feisty and unconventional, she still acts like an emotional teenager at times, even now at the age of thirty-two. That emotion will wreak havoc on Sammy’s family reunion.

Cass was always a natural beauty and charmer. She pursued her dreams to become one of Hollywood’s most beloved all-American actresses. But dreams can fade and after twenty years, Hollywood is wearing her out. As a forty-three year old actress in a twenty-something world, she wonders how much longer she can keep it up especially with the secret she carries.

Gabby is the happy homemaker of the bunch. She’s considered the most normal sister with a wonderful husband and three beautiful sons. But to her, that’s all she is – wife and mother – and feels like the shell of her old self. Longing for some personal identity, Gabby hopes to regain some self awareness this summer.

Read what happens when these sisters get together to recapture those fleeting flashes of memories, “firefly memories”.

In September 2010, FIRST for Women Magazine included Summer of Firefly Memories as its FIRST pick for Chick Lit. FIRST editorial assistant Mirel Ketchiff gave a heartfelt review – “This is the perfect beach read. The message – that it’s never too late to start anew – was refreshing and powerful.” Thanks Mirel!

Get “Summer of Firefly Memories” for your Kindle

Or pick it up in paperback!