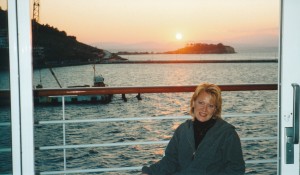 Last Friday, the headlines read that the summer of discontent began in Istanbul, Turkey. Those headlines spoke to me on a few levels.

Obviously I have a “Summer of” theme going with my novels, so that phrase right there struck me. But it mostly caused me to reflect on a trip I took to Greece and Turkey in January 2000.

FYI – my sister and I got a CRAZY deal on a cruise there. Apparently, the Y2K scare had resulted in high vacancies on the cruise ships. And well, there was a rather large earthquake in the area the fall of 1999 (if memory serves correctly). They were practically giving away tickets, so who were we to pass up such an opportunity? 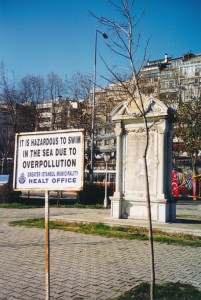 The headlines of late made me reflect on our few days in Istanbul.

The city was never on my dream list and I was pleasantly surprised. Our stop there was at the end of our trip – after having seen Athens and lovely parts of Greece. It was winter too, mind you, so we actually have photographs of just the two of us without the crowds of people!

The seawater in the port surrounding Istanbul was welcoming (not) with swarms of jellyfish and pollution. 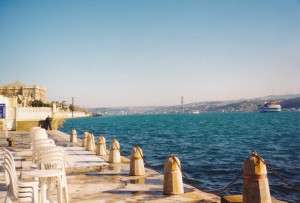 Can you see some sort of guard standing on the water’s edge in the left center of photo? I was not taking his photo and only noticed him today.

We planned on taking a ferry to the end of the channel to the Black Sea. We missed the ferry, but caught a cab that took us on an exhilarating (and scary) ride through the city so we could catch the ferry upstream at the next stop. I rather felt a bit like James Bond as we ran from the cab to the ferry and actually had to jump from the dock onto the boat!

We rode that ferry upstream on a sunny winter morning, not really knowing what to expect when we got to “our last stop.” 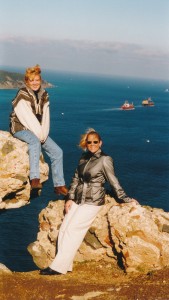 But we got there!

It was a hill covered with grazing cows and giant rocks clinging to the edge of the cliffs. We posed for a nice shot with the Black Sea behind us.

That’s me on the left in my warm hiking clothes (with the wind making my hair look nice and funky). While, my sister on the right looks rather glamorous in her non-sensible hiking attire. In fact a local chap we hung-out with fondly called her “Miss Hollywood.” 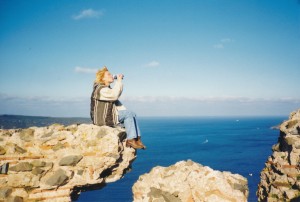 What a way to end the day, huh? It was a day to remember. I’m thankful for those days, those adventures.

These days I’m afraid of cruises, not so interested in traveling too far abroad, and discovered I don’t fare too well anymore enjoying a beer in the afternoon. Ha!

This post isn’t in any way commenting on my thoughts on the unrest happening in Istanbul today. I’ll keep those thoughts to myself and hope for peaceful solutions for the people soon. It was just nice to reflect upon a fond memory of my own.

I dig memories, in case you couldn’t tell from my book titles and all…