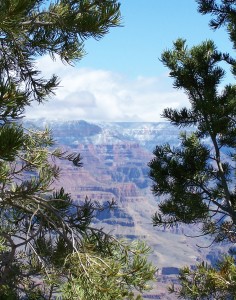 The WILDEST thing happened to me a few Thursdays ago. Honest. Earlier in the week, for some reason I was thinking about bobcats. I guess one cause may have been the nagging desire to write a post about how Meg’s encounter with a bobcat (MY CHRISTMAS CURSE) at the Grand Canyon was based on my own experience there many years ago.

The next few photos shows the only evidence I had of the cat—its paw print in the snow. That was March 2007. A late spring storm blanketed the top of the canyon with snow. 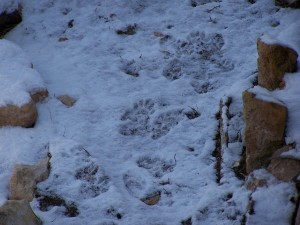 And just like in Meg’s story, news of a bobcat stealthily walking along the canyon-side of the rock wall spread among the morning sightseers.

“There is it.” “I see it.” Visitors pointed the way. I knew it was getting close to us. I peeked over the nearest rock and stonewall. There he was! Just a few feet below me. He looked at me, blinked, and continued on his way. His day was not impacted by my presence one iota.

His presence, however, continues to impact my life. I knew that sighting was something rare and special. I became even more “aware” of the wilderness of the Grand Canyon. I fell more in love with the Grand Canyon—as if that could be possible.

That is one of the few of Meg’s stories that were based on my own past.

I’ve never seen a bobcat since (at least until recently). I live in a rural part of central Arizona where photos of mama bobcats and kittens appear with regularity some seasons of the year in our local newspaper.  But these young kittens and juveniles don’t quite look like the one I saw. The cats in the paper are usually adorable orange spotted fluff balls. The one I saw looked more like a mountain loin with a stubby tail.

About four years ago, my daughter (then two-years old) was riding her tricycle in our driveway. I was sitting my pregnant self in the shade several feet away. She looked at me and said, “I just saw something.” She wore a very perplexed look on her sweet little face. I wondered, A bird? A bunny? And then a woman in a minivan pulled up along our driveway and explained to me that a bobcat had just crossed the street and jumped on our neighbor’s fence wall.

Ah-ha! That’s what she saw. She just didn’t know what she was seeing or even the name of it really. “Bobcat” hadn’t been on our list of everyday words.

Just a few weeks ago, I thought of these sightings and as if Sammy herself (The Loon Lakes Series) had nudged me, I researched a bit about what a bobcat sighting could mean. I thought it was interesting and found one Internet page where a man wrote about his own sightings and meanings. For him, they fit.

At this point, I tucked away these thoughts and put the post back on my ever-growing to-do list.  But that’s not where they stayed!

A few Thursdays ago (January 15, about 1:45pm) in the light on day, I was standing on my sister’s driveway—in a new housing development, still under much construction—fastening my youngest daughter in her car seat. I glanced out the rear passenger window and “saw something.” At first my mind thought it was a giant stray Scottie dog—it was a dark charcoal color. As the animal looked directly at me, it dawned on me that I was looking at a bobcat. It quietly crossed the street disappearing into the desert brush on the other side. I was within forty feet of it—that close!

The moment I figured out what I was looking at, I exclaimed out loud, “It’s a bobcat!” My young daughter replied, “Me wanna see it.” I struggled to unbuckle her so she could turn around and see it, while not taking my eyes off of the animal. My phone was in my purse. There was no way I could get a photo. It simply disappeared.

I felt like one of those people who claim to have seen Bigfoot. You don’t know what you’re seeing for just a few seconds, and then the light of recognition turns on. But by then, the animal is gone. Yes, I saw one at the Grand Canyon—but that was the “wilderness.” I went there to be submersed in nature and clear out the cobwebs in my mind. It wasn’t exactly out of the ordinary up there. But this last sighting, he was bringing me a message. That, I’m sure of.

A bobcat symbolizes patience and planning. “In order to get what we want, we must be willing to plan, adapt, and have patience to see our ideals manifest.”

Personally, it also reiterated some thoughts I’ve been having lately about returning to nature myself. The natural environment tends to be its own character in my books. The characters get out in nature, and the events often occur there. I enjoy reading and writing about nature. My past life in environmental engineering allowed me to partake in some fun fieldwork and projects surrounded by nature.

One of my “promises” for the New Year was to get back out into nature. “Get out and play.”  Honest to goodness.

Two books I busted out to read and inspire me this month are KEEPING A NATURE JOURNAL and THE NATURE CONNECTION—both by Clare Walker Leslie. The first is full of dreamy sketchbook ideas. The second is chock-full of crafty plans for kiddoes. Love the inspiration I’ve found in both!

And I truly believe that this bobcat was put in my path as a reminder to be true to that promise to myself, AND that I don’t have to go far or to a national or state park (although I really love those).  I just need to seek out nature as near as our backyard and other local spots.

I think my writing and characters will benefit from the mental clarity and day dreaminess that occurs to me when I’m in nature for a while.

I hope you might be inspired to take a lesson from Sammy and look into those rare animal sightings or even if a not-so-rare one decides to hang around you a little longer than usual. Check out this website (whats-your-sign.com) for some insight as to what your sighting could mean.

Regardless of your faith or beliefs, the natural world is full of wonder and we are all connected. Messages can come from God, angels, and animals, even insects. I’ll take mine wherever I can get ‘em. Happy New Year!