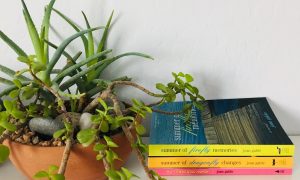 Summer of Firefly Memories was never written as the start of a series. It was a stand-alone story about four sisters reuniting after years of confusion and hurt feelings—something many relationships experience.

Yes, the ending wasn’t the typical happily-ever-after. It was realistic for a story that took place over a few short months. There was no way the guy could get the girl that quickly—especially with all the emotional drama she’d endured with her sisters. The story wasn’t meant to be about these two characters. But Sammy and Jake’s relationship organically developed as the story was written, and I (as the author) happily used that relationship to move the story along.

I agree with many readers that the ending seemed rushed. But I think that’s how a long vacation ends. The last few weeks or days fly by quickly, and that was the intention of the story. Sammy was happy—ready to get back to her home, her life, and her friends. The end. That was it…or so I thought. It was originally written over a few years before 2008, published in paperback in 2009, and made digitally available in 2010. So, it’s at least ten years old. It’s gone through a few revisions and updates in the first several years. But the soul of the story remained unchanged.

When I wrote Firefly Memories, I was not married and had no children. The characters and I were much younger then. Ten years on, I’m married and have two children. I’ve aged but my characters have not. I’m currently revising the story to remove pop cultural references that do not allow the story to be timeless—which it needs in order for the next in the series to make sense. (But I’ll write about that another time.)

A few years after publishing Firefly Memories, many readers wanted the happy ending. “What happens next?” Well I knew what happened. I assumed most readers did too. But turned out I needed to write the rest of the story. In 2013, the second book was published, Summer of Dragonfly Changes.

It was different from the first. SPOILER ALERT: As far as Sammy knew, her family was rehabilitated—reconnected. They faced their issues and were on the road to acceptance and growing closer as a family. In book two, Sammy was happy and deserved to be. This was her happy ending. She and Jake grew closer. She was able to mature into the position of guide. In book one, Sammy was the student, gently guided by Kelly, Kathy, Jake, and her sisters. In book two, the student became the master. It was her turn to be happy and be the guide.

Readers continue to ask for the next story. “How does it end?” It’s been several years. I’ve been writing two books simultaneously—the third in the Loon Lake Series and the story of Dana and Kathy in Napa Valley. Will the Napa story turn into a series? Probably…eventually…These characters are so lovable and fun to hang out with. But they’ve all needed time to grow and evolve. The 2017 fires in Napa have made me rewrite much of that story.

Most readers don’t consider two books a series. So I guess this is the year a series in born…