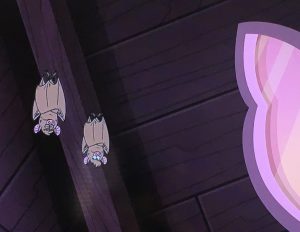 If you’ve ever been trapped in a room with a bat, you’ll remember it—for a long time. I know, I know, bats are misunderstood little creatures. They eat TONS of bugs and mosquitoes (I appreciate that). They are—for the most part—harmless to people. Very few species suck blood. They are endangered.

I personally like them for many of those reasons. I’m particularly fond of their delicate and interesting wing designs. I have experienced them up close and personal—both in nature and in captivity. They make fun Halloween decorations and cartoon characters (like these Wild Bat Brothers from PBS’s Nature Cat).

But put one in a cabin with me and I’ll act like Kelly in a heartbeat! I’ve been there—hiding under the covers in a bed with the flapping sounds of a bat silenced by the high-pitched screams of my sisters. I’ve also been one of the lucky ones to run out of the cabin, leaving an unfortunate sibling behind under covers to fend for herself. When it comes to bats in the cabin, it’s every person for themselves.

I do not advocate using the characters’ methods for bat removal. I actually read a much better approach is to gently knock the bat to the ground with a broom or such object, and then cover with a towel or blanket to remove. But my characters don’t Google anything, and their decisions were made at 3 a.m. using proven techniques from their past.

I love the bat scene with these characters. It captures one of the more frightful aspects of cabin or cottage life. It’s also one of the more personal nature connections that my characters have. I hope you enjoyed it.