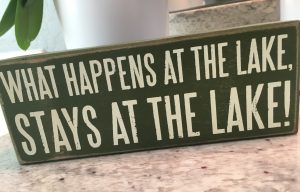 In Firefly Memories, Alex throws the mother of all temper tantrums by jumping out of the boat, into the lake, and never turning back. It was such a knee-jerk reaction…some readers can’t relate. Others know a friend or family member who might just pull such a stunt. (It made me love Alex even more.)

I love that scene and the various characters’ reactions to it. Even Alex’s thoughts on the matter after the incident give the reader a clear understanding of Alex’s anger toward Cass—even though we don’t know why until a bit later.

Alex is at her most petulant, stubborn, and angry tipping point. Everything starts to breakdown and the healing conversations can begin. We rarely have a conflict and address it out of the blue. We usually need a colossal misunderstanding or argument to really catapult the discussion.

Many readers relate to the scenes between the sisters following the “big blow out.” They relate to the pain of loss, misinterpretation of memories, actions, etc. Then there is peace and calm. Things have changed. Pasts may not necessarily be forgiven or forgotten. But at least there is enlightenment about how each other shared the same past but have completely different recollections of it. I imagine we all experience something similar at some point in our lives. Don’t you think?